as Elizabeth Holmes
Streaming on Hulu
In a tale of ambition and fame gone terribly wrong, Elizabeth Holmes develops healthcare technology that puts millions of patients at risk and loses everything in the blink of an eye.

Welcome Message
Welcome to Amanda Seyfried Vault, your best resource for everything Amanda Seyfried. She is best known for starring in films such as "Mean Girls", "Mamma Mia", "Les Misérables", and her latest film and TV projects include "A Mouthful of Air", "The Dropout", and "The Crowded Room".
We aim to bring you all the latest news and images relating to Amanda's acting career, and strive to remain 100% gossip-and-paparazzi-free. Please take a look around and be sure to visit again to stay up-to-date on the latest news, photos and more on Amanda.
Photo Archive
Check out the latest additions to our ever expanding gallery hosting over 65,000 photos!
Gallery Updates You Should Have Left

“You Should Have Left” Screen Captures

Originally scheduled for a theatrical release, Universal Pictures has released “You Should Have Left” on VOD on Thursday, June 18. This means I have been able to update with our gallery with over 770 high-quality screen captures of Amanda portraying Susanna Conroy in David Koepp’s 2020 film. Be sure to check out the movie on either Amazon or iTunes.

Based on the 2017 book of the same name by Daniel Kehlmann, “You Should Have Left” tells the story of Theo Conroy (Kevin Bacon), a successful middle-aged man whose marriage to his much younger actress wife, Susanna (Amanda Seyfried) is shredding at the seams, frayed by her secretiveness, his jealousy, and the shadow of his past. In an effort to repair their relationship, Theo and Susanna book a vacation at a stunning, remote modern home in the Welsh countryside for themselves and their six-year-old daughter, Ella (Avery Essex). What at first seems like a perfect retreat distorts into a perfect nightmare when Theo’s grasp on reality begins to unravel and he suspects that a sinister force within the house knows more than he or Susanna have revealed, even to each other.

Elise
Comments are off

Blumhouse Thriller “You Should Have Left” Trailer and Release Date 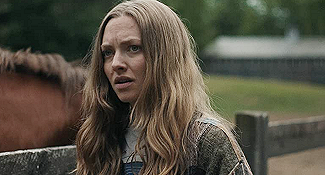 A Mouthful of Air (2021)
Amanda as Julie Davis
Photos / IMDb

Julie Davis writes bestselling children's books about unlocking your fears, but has yet to unlock her own. When her daughter is born, that trauma is brought to the fore, and with it, a crushing battle to survive.

TV series that chronicles Theranos founder Elizabeth Holmes' attempt to revolutionize the healthcare industry after dropping out of college and starting a technology company.

Exploring true and inspirational stories of people who have struggled, and learned to live with mental illness.

THIS FANSITE IS AD AND STALKERAZZI FREE - WE RESPECT AMANDA'S PRIVACY.
Amanda Seyfried Vault is a non-profit fan site dedicated to actress, Amanda Seyfried. We are in no way affiliated with Amanda, her management, her agency and/or friends and family. All graphics and original content are being used under the Fair Copyright Law 107 and belong to Amanda Seyfried Vault. Other images and text belong to their respective owners. No copyright infringement intended. If any of these photos are yours and you would like them removed please email me.

You can find out more about which cookies we are using or switch them off in settings.

This website uses cookies so that we can provide you with the best user experience possible. Cookie information is stored in your browser and performs functions such as recognising you when you return to our website and helping our team to understand which sections of the website you find most interesting and useful.

Strictly Necessary Cookie should be enabled at all times so that we can save your preferences for cookie settings.

If you disable this cookie, we will not be able to save your preferences. This means that every time you visit this website you will need to enable or disable cookies again.